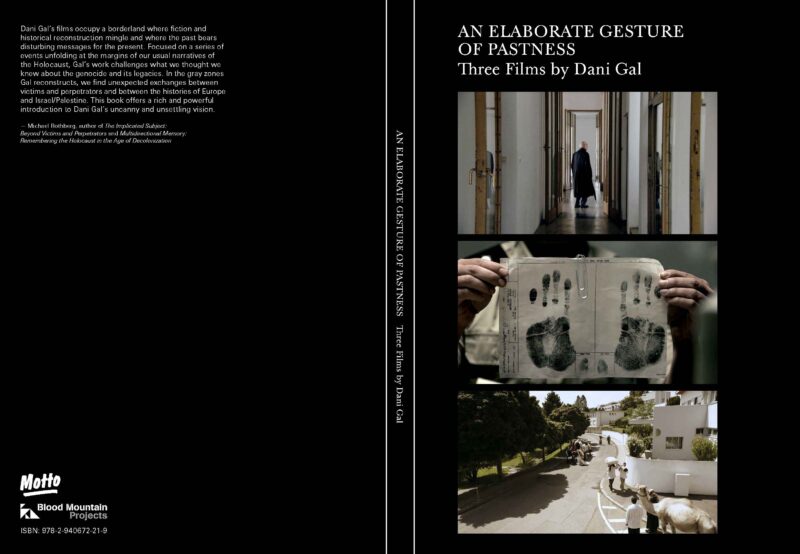 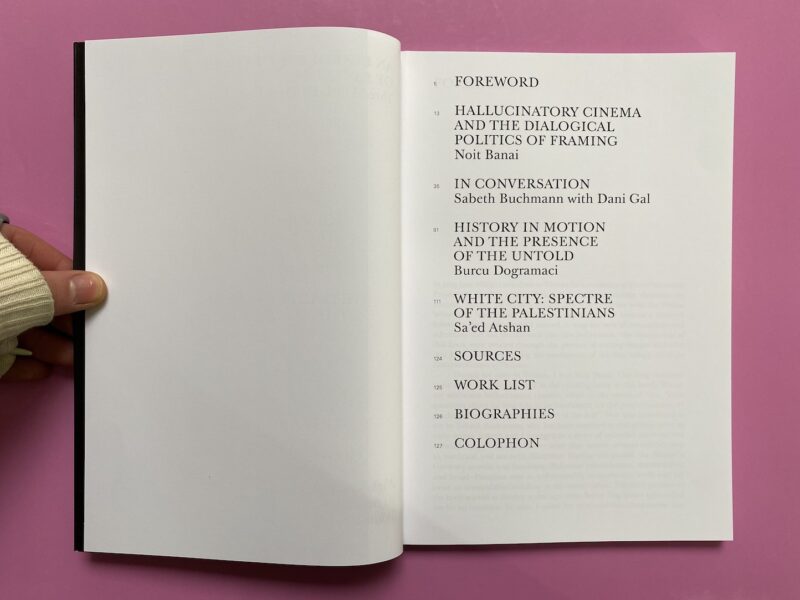 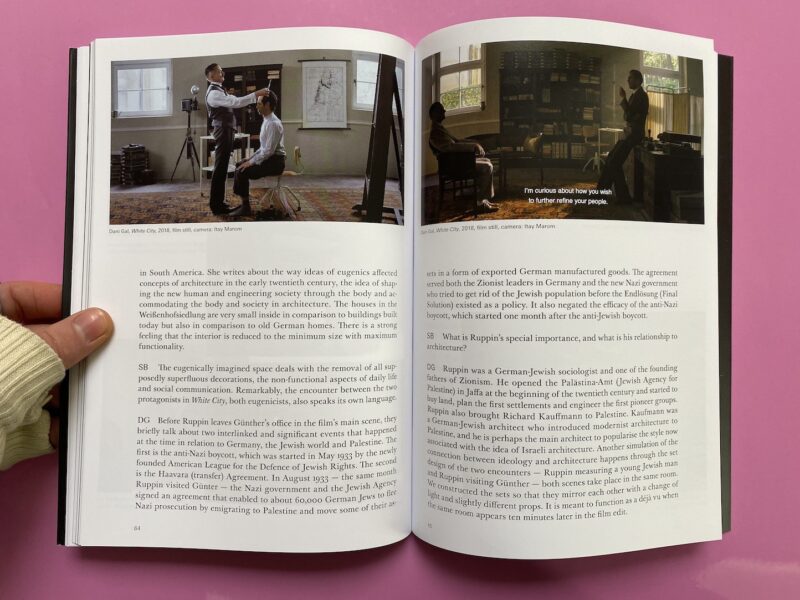 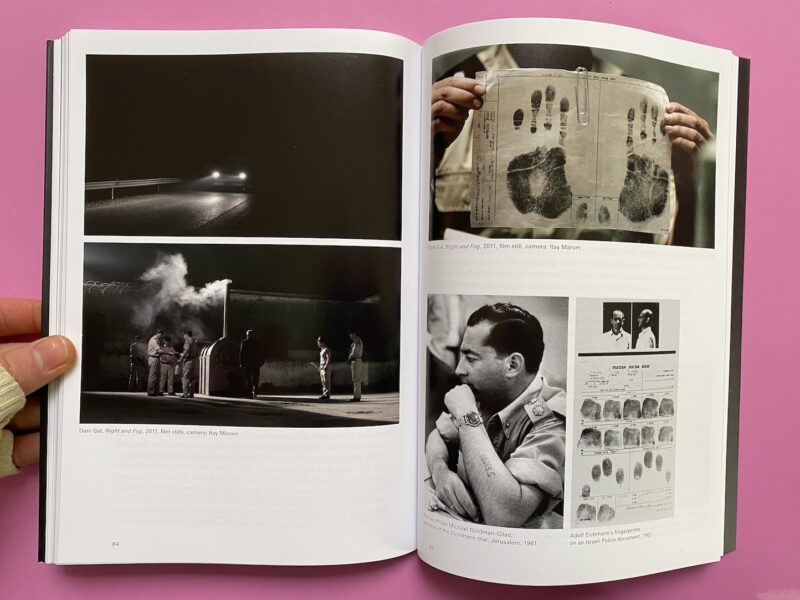 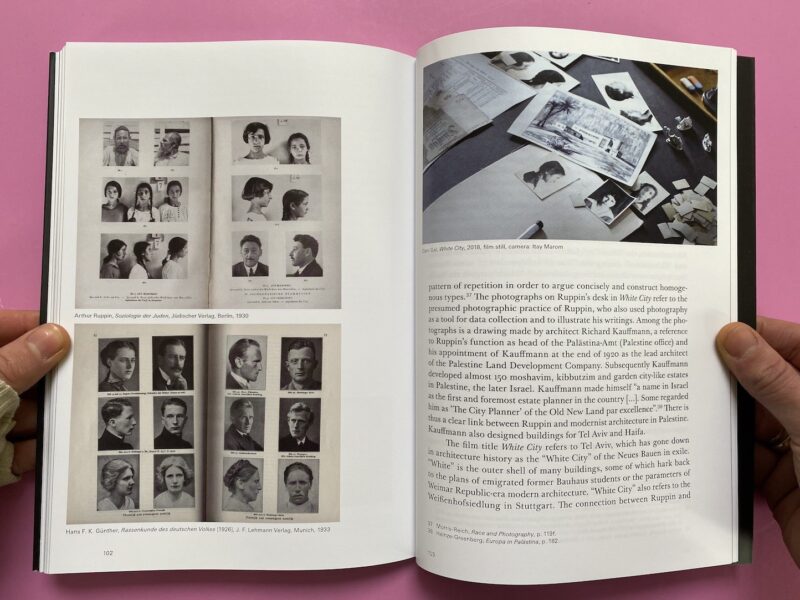 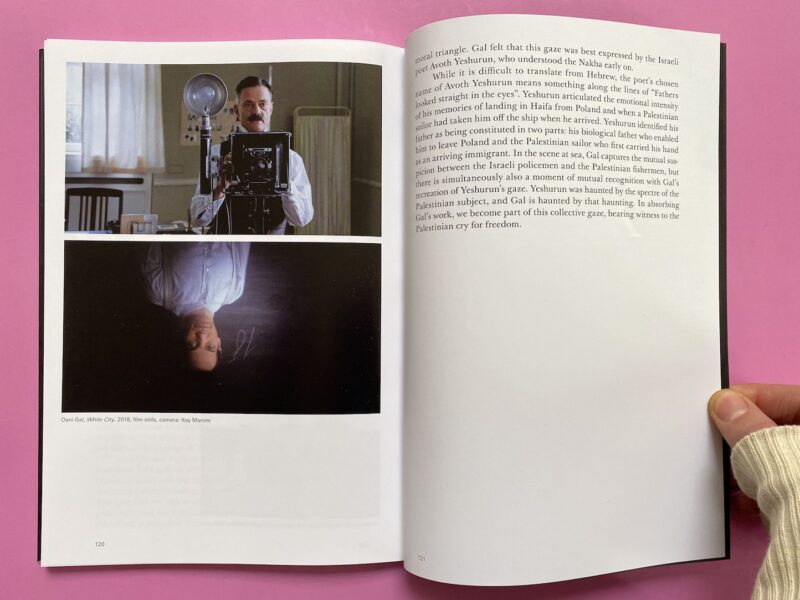 “Dani Gal’s films occupy a borderland where fiction and historical reconstruction mingle and where the past bears disturbing messages for the present. Focused on a series of events unfolding at the margins of our usual narratives of the Holocaust, Gal’s work challenges what we thought we know about the genocide and its legacies. In the gray zones Gal reconstructs, we find unexpected exchanges between victims and perpetrators and between the histories of Europe and Israel/Palestine. This book offers a rich and powerful introduction to Dani Gal’s uncanny and unsettling vision.”

– Michael Rothberg, Author of ‘The Implicated Subject: Beyond Victims and Perpetrators’ (2019) & ‘Multidirectional Memory: Remembering the Holocaust in the Age of Decolonization’ (2009)

With written contributions by Sa’ed Atshan, Noit Banai, Sabeth Buchmann, Burcu Dogramaci, and Dani Gal, the texts revolve around ethical, moral, historical and aesthetic dilemmas. Accompanied by visual and literary materials from Gal’s extensive research practice, the publication raises questions about cinema as an instrument for the production and reproduction of the real: dialogic versus fixed notions of history, unsettling empathy, historical trauma and the possibility of forgiveness in the context of German, Jewish and Palestinian histories.


The book Historical Records documents commercially released vinyl records of political events of the twentieth century. The book contains 450 reproductions of LP covers from 50 countries. The recordings are of speeches and interviews  of those who were in power, others who objected to this power, of war and peace agreements, human rights struggles, and other radio broadcasts of the events that shaped history from the invention of the phonograph to the fall of the Berlin wall. The project examines how recorded political events turned into a commodity, and what role sound documentation has in the interplay between personal and collective/national memory.

In 1992, shortly after its take-off from Schiphol Airport, a freight plane owned by the Israeli company El Al crashed into a residential complex in Bijlmermeer, Amsterdam. Dani Gal (*1975) visited the occupants of the Bijlmermeer district and journalist Vincent Dekker for the purpose of entering into a dialogue with them about the plane crash and reassembled everyday life in the reconstructed building. Based on comprehensive research, following the atmospheres and worlds of subjective memories and experiences, the artist‘s book gives an overview of various occurrences and stories woven into a complex structure of abstract and formal connections.

The Oxford English Dictionary is the accepted authority on the evolution of the English language over the last millennium. It is an unsurpassed guide to the meaning, history, and pronunciation of over half
a million words, both present and past. It traces the usage of words through 2.5 million quotations from a wide range of international English language sources, from classic literature and specialist periodicals to film scripts and cookery books. It is the The definite record of the english language. I.E is a book that contains all of The Oxford English Dictionary’s example sentences.